What is the Lancelot-Grail?


Manuscripts of the Lancelot-Grail

note: many of the links in the Lists are broken: efforts are under way (5 March 2019) to fix them

This describes the rationale for the pilot phase of a computer data-base of text and pictures that we hope will eventually form a Corpus of Lancelot-Graal Manuscripts on the one hand and on the other will present a model for manuscript analysis in general. An international team of Old French specialists, art historians and manuscript specialists are collaborating with technical consultants in information science and telecommunications to create and use a searchable data-base of primary manuscript text and secondary commentary linked to a searchable data-base of images. The specialists will use the data-base to generate a variety of products, both in the traditional form of books and articles, and in electronic form on the Web and CD-ROMs.

M. Alison Stones, Professor of History of Art and Architecture, University of Pittsburgh

We are developing an approach that treats the manuscript page as a conceptual map whose constituent elements can be identified and defined, plotted, compared, contrasted, linked to each other in any number of possible combinations, and accompanied by commentary. What we hope to learn is more about the intentions of the makers of the manuscripts and those (patrons ? directors of operations ?) who guided them in the choices they made--in terms of text variants and the wording of rubrics; the types and places of minor initials in a hierarchy of decorative levels in relation to the text; the types and levels of illuminations, whether historiated initials, miniatures, or marginalia, their places and components; the episodes they depict and the particular narrative emphasis of each depiction.

Our work to date shows that the choice, placement, and composition of the illustrations varies very considerably from one manuscript to another, even among copies produced by the same scribes, decorators and artists.  Certain manuscripts display at times a very surprising degree of careful attention to the nuances the text in that copy conveys. Illustrations showing the same episode in other copies will not necessarily present a comparably text-dependent picture. We are looking at which, where and how, in the hopes of moving a step closer to understanding why. 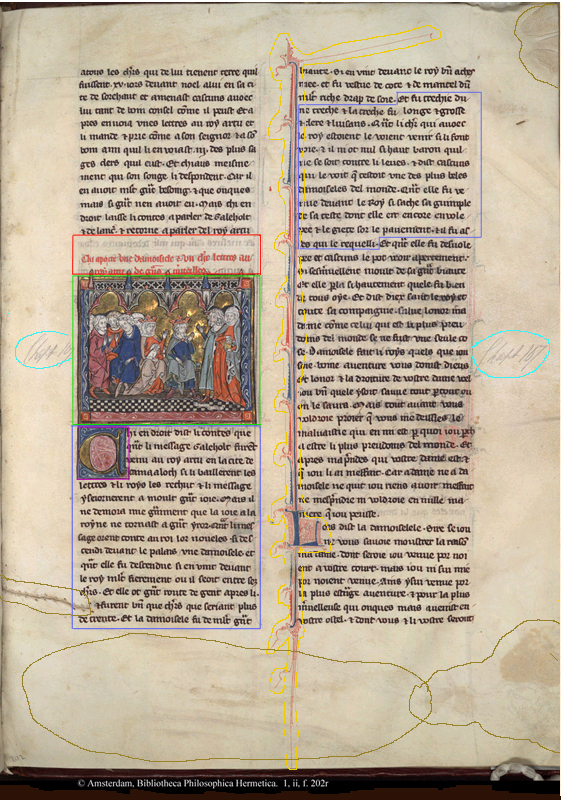 Our conceptual model is a unique application of a Geographical Information System (GIS) to associate information objects with the appropriate passages, illuminations and pictures in the manuscript, to assist the reader or analyst with exploring the manuscript further. These information objects can be sounds, text, images or other forms of information. These annotations will provide expert commentary, guides to characters or underlying themes and other information, to support the analysis and understanding of the manuscript. The attachments will underly the image of the manuscript so as to not interfere with its pictorial impression and interpretation. They will be summoned by "clicking" on parts of the manuscript or on buttons located outside the manuscript. We are not aware of any similar GIS application of the type we propose in existence today.  We are also developing a web interface based on GIS concepts but using a MSACCESS data base linked to Active Server Pages.  The prototype has been demonstrated at several Art-Historical, Medieval, and Information Science conferences.

Unravelling the links between and among the different types of information about the Lancelot-Graal is our narrow aim in this project, but as an intellectual exercise our tools and methodologies are generalizable to all kinds of other areas of conceptualization and analysis beyond the limits of humanities disciplines.

Medieval manuscripts are now inaccessible to all but a small audience of scholars. They are carefully preserved, with restricted access, in research libraries. Disseminating the contents of those originals while preserving them from direct handling is thus an important by-product of this project.

The pilot phase consists of photographing, scanning, digitizing, encoding, and analysing the texts and images in three prose Lancelot -Graal manuscripts: the copy now divided between Amsterdam BPH 1/Manchester Rylands Fr. 1/Oxford, Bodl. Douce 215, and the other two copies produced by the same team of craftsmen: London, BL Add. 10292-4 and Royal 14.E.III. This group of manuscripts has been selected for the pilot study because of its particular textual, stylistic, iconographic, and historic, importance.  Add. 10292-4 contains the entire Lancelot-Graal cycle and was the base manuscript chosen by H.O. Sommer for his edition published in 7 volumes between 1909 and 1913.

Written by at least two scribes, decorated by two or more decorators, these books also offer a wealth of illustration by at least three artists, and accompanying sets of lemmata. Yet the text versions are not the same. The selections of illustrations also differ, and there are significant variations in how comparable subjects are depicted and described in the accompanying lemmata or rubrics. Particularly unusual are the depictions and descriptions of the Grail and its liturgy and of the Lancelot-Guinevere relationship--the two focal poles in the story. Arthurian heraldry is profusely illustrated, with relative consistency for the first time in the entire illustrative tradition, and there are also some shields of early ownership. Their subsequent histories--Royal 14. E. III may have been owned by Elizabeth Woodville (d. 1492), wife of King Edward IV of England, and the others are linked to Flemish nobles and even to members of the bourgeois class--are important witnesses to the reception of Arthurian material. We are conducting a comparative analysis of these textual and pictorial variations in order to find out how these stories were read, interpreted, copied and received.

The structural principles which we are devising and appling to the study of these manuscripts, texts, and pictures will demonstrate a method of multi-layered analysis that will have wide application potential.

We consulted specialists at the Morgan Library and the J. Paul Getty Museum for recommendations about the choice of film and photographic methods, and drew from Alison Stones' experience photographing in European and American libraries. Her photographs of manuscripts are deposited at the Conway Library, Courtauld Institute, London, and at the Photo Study Archive of the J. Paul Getty Center in Santa Monica; her images of monuments can be consulted on http://www.pitt.edu/medart, developed by technical assistant Jane Vadnal. Transparencies were prohibitively expensive and digitization directly from the manuscripts was not an available option in 1996.  Digitizing was done at the University of Pittsburgh by graduate students working for academic credit under the guidance of Alison Stones and Kenneth Sochats. We used a Nikon 35mmslide scanner LA-1000, upgraded in Fall 2001 to a Nikon Super Coolscan 4000, saving an archival version at 2400 dpi, together with versions at 1500, 800 and 300 dpi. The latter were enhanced to a limited degree in Adobe Photoshop, now using version 6 from Fall 2001. Exact records have been kept for each scanned image describing the enhancements.  However, it is evident that scans of whole pages made from slides produce poor results.

In Spring 2002 the Bibliotheca Philosophica Hermetica kindly allowed us to have the Amsterdam manuscript digitally photographed by the Digital Image Archive of Medieval Music (DIAMM: http://www.diamm.ac.uk).  A digital scan of Amsterdam, BPH 1, vol. i, f. 118, is shown above.  For web transmission we are using a jpg at 96dpi made from the archival tiff which is preserved in several copies on DVD.   In Summer 2002 the John Rylands University Library of Manchester kindly allowed us to have the illustrated pages in Rylands French 1 digitally photographed, also by DIAMM; and in Summer 2004 the manuscript curators of the Bibliothèque Municipale, Rennes, and the Médiathèque Municipale Louis Aragon, Le Mans, kindly allowed us to have the illustrated pages in Rennes 255 and Le Mans 354 photographed, again by DIAMM.  We gratefully acknowledge our partnership with DIAMM who also holds copies of these scans and makes them available through the DIAMM site.
In 2007 the Bibliothèque nationale de France allowed us to download without charge any image from Mandragore, Banque d'images and Gallica and to incorporate them into our site.  Downloading, resizing and renaming has been undertaken by graduate students in Art History at Pitt.

· A clickable chronological and geographical ordering of Lancelot-Grail manuscripts.   To be supplemented in 2009 by maps.
· Comparative pages: first selections are:
Maritime Adventures in Estoire


· Sochats developes a model for selecting manuscripts for comparisons.  Full implementation will follow.  Further comparative pages are in preparation.

For preliminary access we copied the 300 dpi images to ImageAXS software; we also use zip disks and CDs to transmit the images to team members.  We can also access the images and commentary in Fetch directly from the History of Art Department's Visual Resources Lab server so that the project participants can make use of and contribute to the work of analysis.  We have developed an original taxonomy, authority subject-lists, and analytical commentary on each of the three project manuscripts. We are attaching these to the scanned images, basing our structural approach a specially adapted version of Geographic Information Systems (GIS) software.   Pending a fully developed web application of GIS, we are concurrently developing a database using non-propriatory MSACCESS and viewing it in copyrighted Active Server Pages on a password-protected web site which will eventually be made public with the permission of the libraries.   The manuscripts can be accessed individually or comparatively, serially or by folio, episode, subject, and key word.

The technical structure is copyrighted by Ken Sochats, the commentary and analysis by individual or collective project authors, the images by the respective libraries.

While the project is in progress, the original slides are preserved in acid-free boxes in the History of Art and Architecture Department at the University of Pittsburgh. The archival scans are preserved on DVD disks with backups of DIAMM images housed at DIAMM.  The 1500, 800 and 300 scans are in locked folders on the Department's Visual Resources Lab NT server which is  routinely backed up to tape. Slides and scans will ultimately be maintained in optimum prevailing conditions at a specialist storage site. Migration strategies will be developed for its maintenance and transfer as standards of archiving improve.

Initial support came from the Central Research Fund of the University of Pittsburgh.  The project has subsequently received research grants from the National Endowment for the Humanities and the Andrew W. Mellon Foundation (January 1, 2001-December 31, 2002) and by Visiting Fellowships to Alison Stones by All Souls College Oxford (Fall 1999), Magdalen College Oxford (2001) and Corpus Christi College Cambridge (2002), and a Fulbright Fellowship to the École pratique des hautes études (2006), and from the American Council of Learned Societies (2009).

Summary of papers to date

London: Computers and the History of Art, 1998, Stones

Manuscripts and Facsimiles, Fidelity or Betrayal? University of Edinburgh, 2002: Stones

Publications: See Studies of the Lancelot-Grail